In 2013, Wanderlust Cameras launched a Kickstarter campaign to fund the creation of a 4×5 box camera with a helix focusing system, called the Travelwide. The Travelwide was made from injection molded ABS plastic and designed to work with a Schneider Angulon 90mm ƒ/6.8 lens. An adaptor for a wider fixed focus version, built around the Schneider Super Angulon 65mm ƒ/8, was produced as a later add on. A 0.3175mm pinhole insert came with the camera, so that you could start shooting immediately. It was one of the first of the recent wave of affordable large format cameras, and it was my first large format camera. At $149, the camera cost less than the Schneider Angulon 90mm ƒ/6.8 they recommended pairing it with.

Towards the end of 2015, my Travelwide arrived unexpected in the mail. While my enthusiasm had waned somewhat over the two years it took for the camera to arrive, I decided it was a perfect fit for a “52 Rolls” project I was joining in 2016. The idea behind “52 Rolls” is to shoot and post one “roll” of film, every week, for a year. For large format, I interpreted a “roll” to mean the two sheets of 4×5 film held in a single standard film carrier. If you haven’t done something like this before, it is a great exercise to get one in the habit going out and shooting frequently.

The pinhole insert provided by Travelwide has a diameter is 0.3175mm. That corresponds to a range of f-stops depending on the position of the focusing helix.

From the f-stop I calculate the length of the exposure using a handheld light meter.

In the past I’d found 35mm and medium format pinhole images unsatisfying. That changed when I started making large format pinholes. 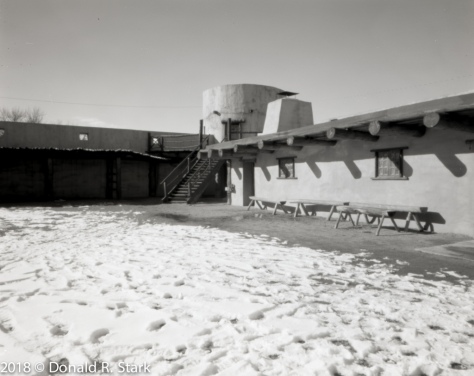 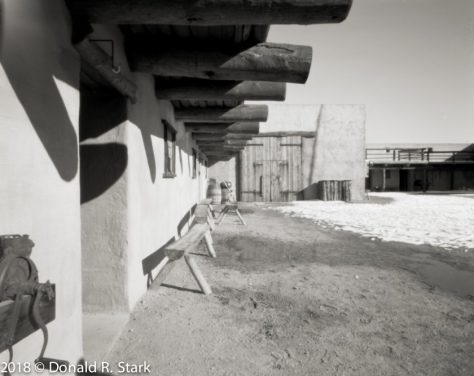 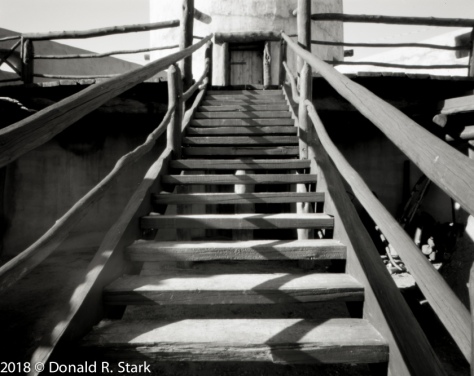 These images were made on the now discontinued Fuji ACROS Neopan 100 because of its reciprocity characteristics. The film underwent standard development with Clayton F76+ developer.

The 2018 International Pinhole camera day was April 29th of this year. Earlier in the month we went to Fort Lancaster in Fort Lupton Colorado to make some images.

Fort Lancaster is a recreation of the 1840’s trading fort located in what is now Fort Lupton Colorado. The fort was created by the The South Platte Valley Historical Society using building methods of the time.

This is my favorite image of the day because it has nice forced perspective from the stairs. 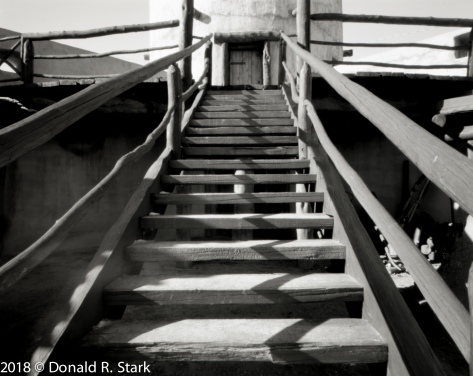 I made this image with a Travelwide 4×5 camera and a f/285 pinhole insert. For film I used the now discontinued Fuji Neopan Acros 100 4×5 sheet film. Normal development was done with Clayton F76+ developer. I like the Neopan Acros for pinhole images, because I don’t need to be concerned with reciprocity  corrections to the film exposure. When I read that it was being discontinued I bought a few boxes and stored it in the freezer. I figure I’ve got enough for a couple more years.

More pinhole images from the day can be viewed at Kelly Little Dog at WordPress.

My journey into fine art photography.